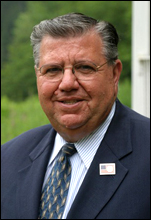 Anthony Bucco is a Republican member of the New Jersey state Senate, representing the 25th district.  He has held office since 1998.

In 2002, Bucco was sued for sexual harassment by a former member of his staff.  The woman alleged that soon after she was hired, the senator made sexual advances and made it clear that he expected sex in exchange for her employment.  She further alleged that when he began to suspect that others were aware of the relationship, he told her that she needed to find another job.