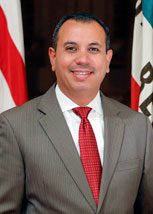 In November 2017, a staff member accused Mendoza of inappropriate sexual behavior, including inviting her to his home.  Soon after, a 19-year-old intern accused Mendoza of pursuing a sexual relationship with her. Mendoza was also accused of retaliating against those who reported his behavior.

In February 2018, Mendoza resigned from the California Legislature.

Brock Adams
US Senator, US Congressman